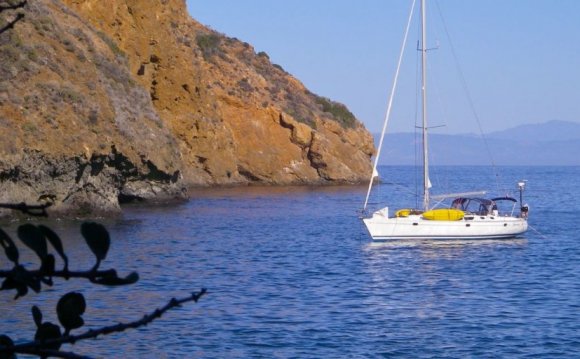 “Not a human being but ourselves for miles; and no sound heard but the pulsations of the Great Pacific.” Richard Henry Dana wrote these words 175 years ago in Two Years Before the Mast, his epic chronicle of the life of the average seaman, eating weevil-infested hardtack and working the exposed Southern California coast. The Northern Channel Islands, just a daysail from the hustle and bustle of Los Angeles, haven’t changed much since Dana’s era. They remain a pristine and rugged cruising ground that, although just 30 miles from “civilization, ” transports you to what feels like a whole other world.

Visiting the islands of Anacapa, Santa Cruz, Santa Rosa and San Miguel often makes me feel like I’ve crossed an ocean and gone back through time. Minke, finback, sei, blue and gray whales pass the islands on their annual migrations. California and Steller sea lions, harbor, fur seals and northern elephant seals gather and breed here. Dolphins playing at the bow are a common sight, and brown pelicans and seagulls nest everywhere. Between the vistas, the concentrated sea life, and the occasional ranger-guided nature hikes, boredom has never been an option here.

The four Northern Channel Islands and tiny Santa Barbara Island are part of the National Park Service. Santa Cruz is the exception, with The Nature Conservancy controlling approximately 75 percent of the territory. (Landing permits are required, but can be easily obtained online.) The remaining 25 percent is part of the National Park Service, which means that there are no amenities—no water, no fuel, no moorings, no stores, no showers, no restrooms and no bars. Abundant wildlife and an occasional solitary park ranger are about all I’ve ever found.

Many southbound cruisers visit the islands as part of their shakedown cruise on the way to Mexico. But heading north from Long Beach, I knew we were in for either a two-hop gunkhole (which was going to take time) or an overnight motorsail, hugging the coast in the dark when the ocean swells and prevailing northwest winds temporarily die down. With only a week to spare in August, a fast nighttime passage was the answer.

We packed up a week’s worth of provisions, filled the water tanks and battened down everything aboard Indigo, our 48ft Celestial center-cockpit cruising ketch. The weather in these islands can be harrying, and since it’s just a hop from Point Conception (not known as “the Cape Horn of the Pacific” for nothing), everything that isn’t secured well can go for a swim or a tumble.

Summertime holiday weekends are busy. Popular anchorages that I could have sworn should only accommodate four boats can be bursting with 20 vessels or more. But the busy days are few and the anchorages are many, so we knew we could find a place to drop the hook in a remote cove.

Coming here, it is absolutely necessary to inspect the ground tackle and get creative with setting fore and aft anchors or two anchors off the bow to minimize swinging, or maybe tie a line ashore off the beam to keep the boat from swinging a wide arc in a narrow cove. This is not the place to go for Anchoring 101. Flopper stoppers also come in handy as weird currents can set up a rolly anchorage keeping sleep at bay.

Weather can be weird too. Although the winds usually settle down at night, at times cold bursts come over the islands, slide down the canyons and hit the water, accelerating to 40 knots before they hit unsuspecting cruisers in the middle of their after-dinner cleanup.

Between October and March, the Santa Anas or “devil winds” come out of the east. These hot dry winds blow directly offshore from the mainland, making the northeast anchorages untenable and a dangerous lee shore. Now’s the time to stick close to NOAA weather reports and keep an eye out for other Santa Ana indicators such as dry decks and a layer of smog out to sea.
Another freak weather condition is called the Sundowner—no, it’s not a cocktail served with an olive or a paper umbrella. We once sat out a tense night in a Santa Cruz anchorage when the temperature rose to 85 degrees at 2200 and blew a light but steady wind from the mainland. At midnight, the weather broke, and we finally stopped sweating on deck—literally and figuratively. Like Santa Anas, Sundowners are a local phenomenon and are often accompanied by fires along the mainland, which can make them especially eerie.

Finally, there is the fog, which can roll in unexpectedly, especially in winter, and be as thick as pea soup, making radar a must. Trying to prepare for all of the above, we packed up and headed out in August, one of the best months California serves up all year.

Dawn brought us to Anacapa, which is really a string of three islets, with a landing platform on the east end used by concessionaires bringing day kayakers and campers. When we have more friends aboard we leave someone to stand off on the big boat while we dinghy in and tie up to the metal ladder where guests scramble up for a visit. A small museum and lighthouse as well as thousands of nesting birds are the reward up top. Anacapa offers rugged vistas for a nice day visit, but not much for serious overnight anchoring, and since there were only the two of us on this visit, we bypassed it and continued along the island chain.

Next up was the much larger island of Santa Cruz, which is 20.5 miles long and 5.5 miles wide. Dozens of great anchorages, wonderful hiking trails and fun caves make Santa Cruz a whole cruise in and of itself. Little Scorpion’s at the east end of the island was a great place to drop fore and aft anchors and take a nap after the long overnight passage.

After that we motored up to Prisoner’s Harbor where, thankfully, one anchor sufficed. We dropped the dinghy and went ashore with our hiking boots in a dry bag. A note on beach landings, which can be acrobatic on any of the islands: it’s best to time the sets to make a fast run in. We always carry our camera and goodies in a dry bag and have some kind of reef shoes, because most of the beaches are pebbly and hard to walk up, especially when pulling along a heavy dink. There have been times I’ve gotten a good soaking when I jumped out of the dink and misjudged the depth.

One of my favorite hikes in the world is between Prisoner’s and Pelican Bay—a three-hour round trip that works up quite an appetite. We fell into bed that night, properly exhausted from the exercise, only to get the rollies around 0300. It’s a strange feeling to roll gunwale to gunwale with no wind and no visible changes on the water’s black surface. A rolly anchorage is a good reason to move on, and so we continued north the next morning, even though normally, I like to drop a lunch hook in Cueva Valdez, where you can make a safe kayak landing by angling into a cave that opens onto a lovely beach. Cueva as well as Platts Harbor also have what are now, sadly, mostly dry river beds that make great scrambling trails. On past visits, we would hike up and take a bath in one of the freshwater pools up top to save water aboard.