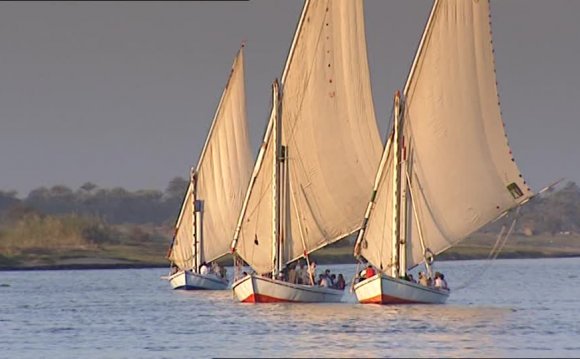 Felucca's tend to be quick, old-fashioned Egyptian sailboats, which have plied the mighty Nile since ancient times. Our feluccas are proudly possessed and crewed by friendly local sailors and they've got been adjusted to easily carry our travellers.

Being a wind-powered craft without engine, felucca's tend to be influenced by the wind to propel all of them forth. The schedule is certainly not rigidly defined, because of this. However, during our cruise, we make loads of stops at tourist attractions and ideal locations for swimming. The felucca sails in the day, taking in the colourful places associated with the Nile village life en-route with various stops, planned or impromptu. The calm program of life aboard allows us to escape the worries of every day life! Ahead of sundown, the anchor is dropped and we also moor at riverside the evening. Nothing beats the feeling of sleeping under a blanket of movie stars!

Feluccas carry between 8 - 13 people easily. The boat’s deck is draped with smooth colourful cushions that serve as your lounging and dinner location throughout the day and also as your sleeping area through the night. Soothing beneath the shade of the canopy, you are able to top your tan under the sun, share nights with new found buddies, after whiling away another leisurely day.

You will have to deliver a sleeping bag/sleep sheet as well as a bath towel with you. The staff, including becoming experienced sailors, have the effect of the preparation associated with included dishes, though they welcome potential helpers! The foodstuff is straightforward but there is an abundance of it. Water, carbonated drinks and alcohol can be purchased aboard at a really reasonable cost, a tally for which is held. On last day, every person pays his / her beverages bill.