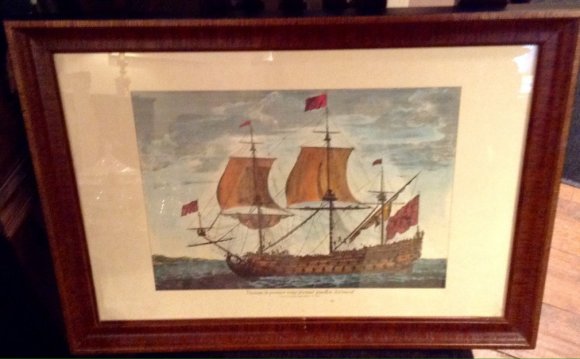 Rotterdam-based design studio, & designshop, received a unique request. Founded by Elwin and Nynke van der Hoek, the design studio and shop was tasked with recreating the magnificent Seven Provinces galleon, a 17th century warship anchored in the Rotterdam harbor, on a scale that would just about fit in an office lobby. But building scale replicas of ships is a long, labor-intensive project, and doing so by hand can take up to a year and a half — whereas they had only seven months. The answer? 3D Printing! The result is this magnificent 1.5-meter-long model, designed by & designshop and printed at Materialise. Meet the Seven Provinces, and its 3D-printed scale replica.

The & designshop duo envisioned creating the model with 3D Printing pretty early on in the project. But first of all, they needed a digital model of the boat which they could print out. Although & designshop has extensive experience with 3D Printing and file generation, they had not yet encountered a model as complex as the Seven Provinces ship. Luckily, Elwin and Nynke were in touch with the assistant director of the Dutch movie, Michiel de Ruyter, which covers the life of the legendary titular character who commissioned and captained the Seven Provinces ship. The studio who did the digital effects for the movie – Belgian company Grid VFX – were able to supply the files of the incredibly detailed 3D models they made of the ship for the movie.

That’s when & designshop approached Materialise. Our design and engineering team provided Elwin and Nynke with guidance in terms of the file’s printability, pointing out what aspects of the file needed to fixed, where the wall thickness needed to be adjusted, and what could be printed separately for later assembly. The challenge was primarily the size: at 1.5 meters long, most companies would have had to print the boat in parts! But it wasn’t a problem for our patented Materialise Mammoth Stereolithography printers. The body of the ship was printed out in white ProtoGen, a strong and light material that was perfect for the level of detail needed on the model. The smallest pieces, such as the sails and cannons, were laser sintered, and the ropes were handmade from nylon.

Then the finished pieces were shipped off to master model builder, Wasili Angelopoulos, who cleaned, sandpapered and primed the ship for painting and assembly. The final stage of post-production was completed by a master painter, who painted on the ship’s color details according to the original, historical colors of the ship. And lastly, the ship was completely assembled and ready to be put on permanent, private display in the heart of London.