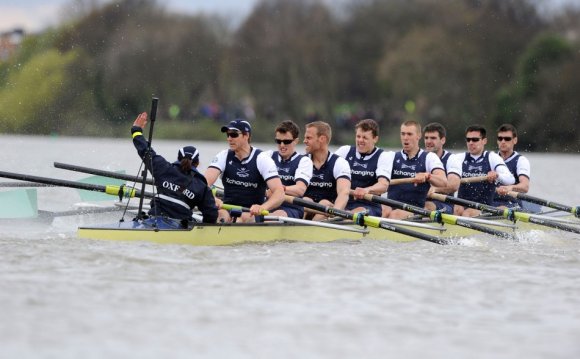 The following is our report from rowing correspondent Rachel Quarrell on the ladies's competition.

The oarswomen of Oxford and Cambridge proved their particular mettle regarding Thames on Sunday, battling through hell and stormy liquid in an eventful competition which saw Oxford use the 71st competition by 71 seconds (formally 24 lengths) and Cambridge valiantly complete despite almost swamping.

The decision masks a close race when the black Blues had a mis-stroke from the beginning although the Light Blues scampered down forward. Oxford restored the disadvantage quickly, quickly deciding into a reliable lengthy rhythm which inched them forward towards Craven Cottage.

The first warnings visited Cambridge, defending their corner well by attempting to drive Oxford out, nevertheless the dark-blue lead moved from two seating in the Milepost to three-quarters of a length approaching Harrods Depository. Since the crews left Hammersmith Bridge behind, Cambridge's cox Rosemary Ostfeld hounded Oxford's stern, taking the bows of the woman vessel unnervingly close to the knife regarding the Oxford stroke-woman.

Next 10 minutes had been extraordinary, as river switched towards the white-capped waves of Corney go. Whenever Oxford pushed to split contact, Cambridge returned. Finally pure water in front of Cambridge, Oxford cox Morgan Baynham-Williams decided to guide for calmer water beside Chiswick Eyot, therefore switched stations, but changed her mind when she realised Cambridge were closing using much better stream and provided umpire Rob Clegg a nasty minute because the teams swapped right back just narrowly missing both.

Though Cambridge had closed the gap, they had taken in some water, and also as Baynham-Williams swapped edges again by scuba diving for shelter into the calmer water beside the Bandstand, it became obvious that Cambridge, nonetheless selecting stream in mid-river, were struggling to stay afloat inside sea-like conditions. "it had been arriving quicker than our pumps could easily get it, " stated Light Blue president Hannah Roberts.